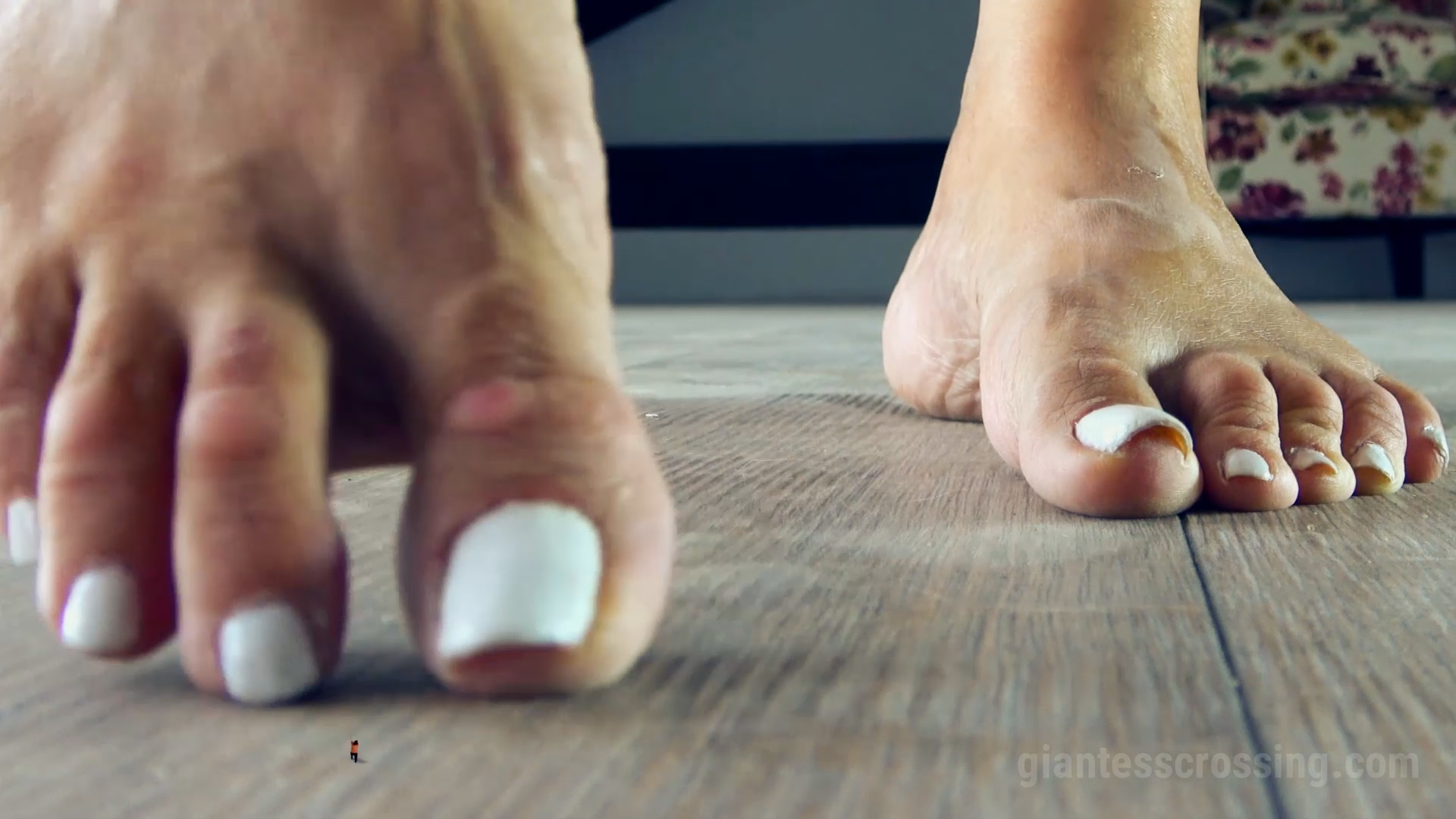 Loryelle and her boyfriend Brandon have arranged to meet in Loryelle’s flat.
When Loryelle comes home from swimming, her boyfriend doesn’t seem to be there and cannot be reached by phone. So she calls her best friend Tara, to find out, if she knows where Brandon is. They joke about shrinking Brandon for his unreliability and squish him like a bug. Tara knows about Loryelle’s secret ability to shrink people, so it’s probably not a joke at all.

Brandon and some of his friends were waiting at Loryelle’s flat for her to return. They have planned a surprise party, but they got shrunken down to 1/5 inch somehow before Loryelle arrives at home. Probably Brandon has read the forbidden lines in Loryelle’s secret diary… But we don’t know. 😉

The clip starts when Loryelle walks around in her flat, wearing her bikini and her flip flops and calls her friend Tara, while the flea sized people at her feet run for their tiny lifes.

Loryelle’s mountain sized flip flop hits the ground and almost squishes one of the shrunken guys and a nearby car. The bugman thinks he had luck, but before he realizes what’s going on, Loryelle comes back and bury him under her giant flip-flop. The tiny car gets flattened just a few moments later.

When you are flea sized, you don’t have that many options. Would you choose  to run away or do you try to climb the mountain sized flip flops get the giantess’ attention? Loryelle walks around in her flat while the shrunken micro people decide, how they spend their last moments, because no one can outrun a foot that is so huge you’d need several hours to walk around.

After a while Loryelle gets rid of her flip flops and walks around barefoot, unaware of the massacre she causes with her beautiful giant feet. Even with her sensitive soles and toes she can’t feel how the desparate bugmen get squashed beneath them.

When Loryelle sits down, some tiny bugmen think they have a chance to get her attention. The bravest of them tries to climb her panty along her sensitive crotch, while others still try to hit or massage her feet. But the attention they get, is not of the kind they were looking for.

At the end there is only Loryelle’s shrunken boyfriend Brandon left. Will she notice and rescue him? Unfortunately not. Loryelle sees nothing more than a tiny  bug. She puts her flip flops back on and squishes the 1/5 inch guy out of existence.

You definitely want to watch this clip, if you’re interested in beautiful and very detailed macro close-ups of Loryelle’s beautiful feet, soles and toes and the very small macro people in comparision, who get squished unaware by them.

The clip contains a lot of barefoot and flip flop shots, a pov butt crush and a tiny man climbing Loryelle’s panty along her crotch.