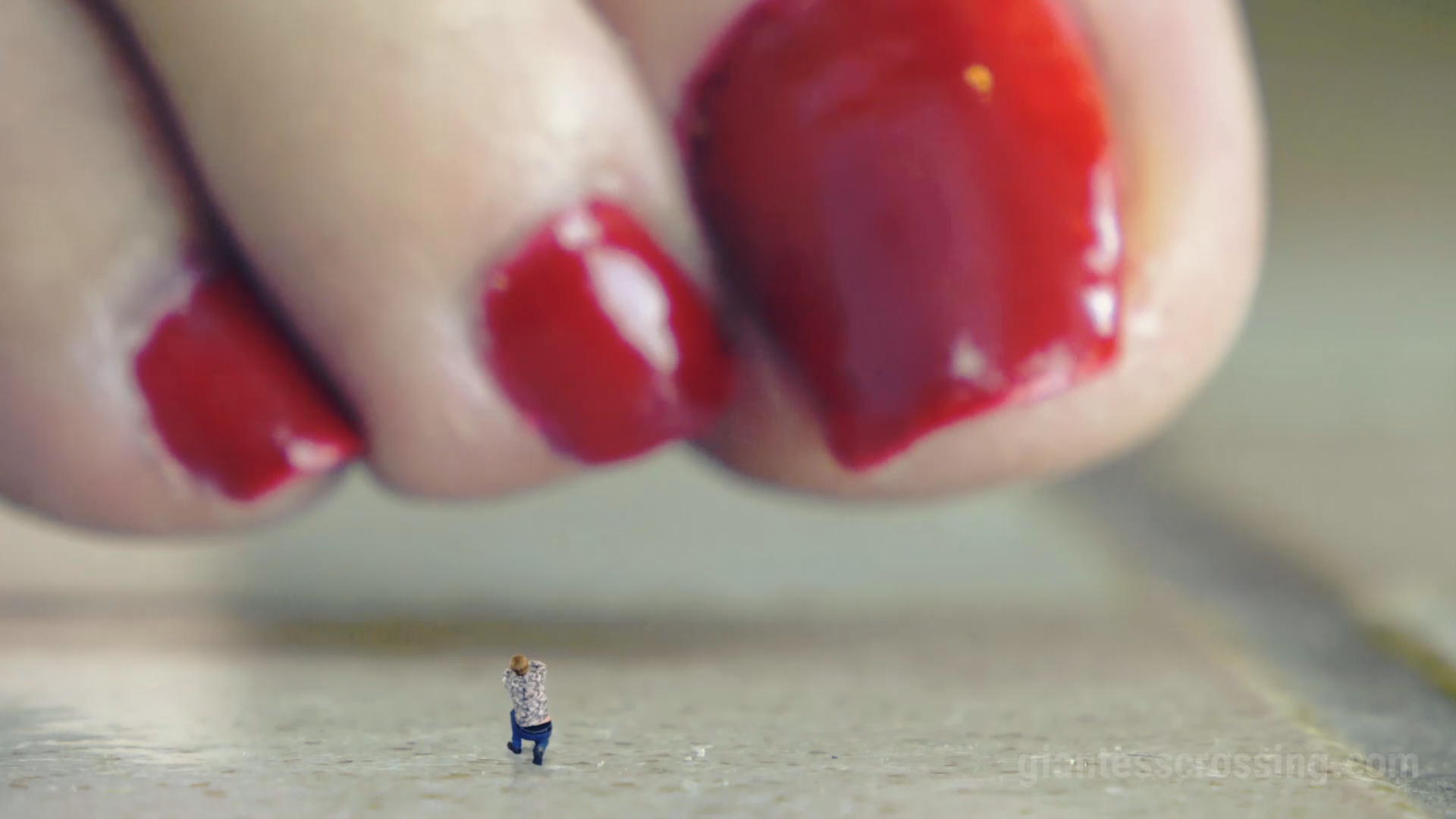 Loryelle is secretary in a large company. She is on her way to the archive, where she has to do some research. When she reaches the archive’s door, her boss is already waiting for her to persuade her for a date. Loryelle doesn’t want to go out with this moron, but he doesn’t accept a no.  He blocks the door and gets obtrusive.

Loryelle has enough of him and shrinks him down to 3-4 inches. She taunts her shrunken boss with her patent high heels while laughing at this tiny idiot. Now he is less macho and a lot scared. The shrunken boss begs for his life, but Loryelle has too much fun, to turn him back normal again. After teasing him a while, she squashes him and twists him out like a cigarette, until he is nothing more than a bloody mess under her patent high heels.

Loryelle looks around and finds a shrunken co-worker. This one has got really small. He’s only a 1/4 inch tall. Killing her boss by stepping on him, turned Loryelle on. So she decides to continue her cruel game. Because of the little size of her shrunken co-worker, she decides to remove her shoes, so that she can feel his little body burst under her nylon covered foot. She gently presses the little man down to the floor with her giantess’ big toe again and again, until his blood squirts up. Torturing the tiny helpless man under her big toe turns her on. Finally she lifts him up to roll and squash him between her fingertips.

Loryelle discovers another shrunken 3 inch sized co-worker who was hiding behind a plant pot. First he tries to run away, as he has watched helplessly, how Loryelle finished off his colleagues, but he has no chance. First she teases him with her huge, nylon covered foot. Then she crushes his legs under her nylon covered foot several times. Poor guy. He tries to crawl away and begs for his tiny life, but the end is clear. So she stomps with full weight onto his tiny body, until he’s nothing more than a bloody mess on the floor.

That should have been all eyewitnesses. Loryelle grabs her folder, ready to enter the archive as suddendly a manager sneaks up to her from behind.
He and his companion want her to do some extra work. They often come along with some unpaid, lame extra tasks for her, but this time they will regret it.

Loryelle has enough of these sponges. She shrinks them both down to a 1/4 inch. She removes her pantyhose and taunts and teases the little guys with her beautiful, huge red polished toes.
Again she humiliates and laughs at the little guys. She crushes one with the ball of her foot, while his colleague has to watch, before he gets squished under Loryelle’s big toe as well.

No one else is left, to block Loryelle’s career now. Several days later, she becomes C.E.O. of the company. The clip ends with a funny surprise crush.

The clip contains a lot of POV and some of my most effortful special effects  crush scenes. I wear a secretary outfit, black patent high heels, pantyhose, nylon feet and bare feet with red nail polish.

This clip was a custom clip, very loosly based on the well known Benny Hill clip, in which the shrunken boss gets crushed by his secretary.